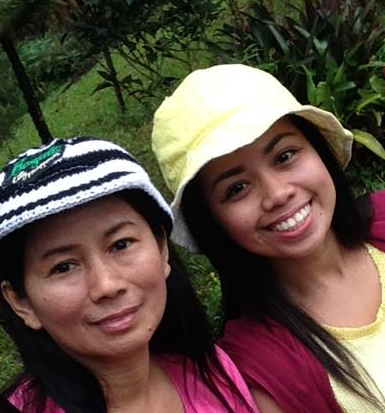 A MOTHER’S JOURNEY: THE UNBREAKABLE WILL OF A FIERCE WOMAN

She was born in a remote island village in the Philippines.  She was married and pregnant at the age of 14.  During that time, women married at a very young age. It was typical to get married young and become a simple housewife.

She came from a poor family and didn’t have the chance to go to school, therefore didn’t learn how to write and read.  Also, school and education wasn’t very essential during that time in their small village.

The man she would marry was the one who would teach her to read and write. After she became proficient at reading and writing, she started to educate herself more. She was eager to learn more. Even though she wasn’t going to school; she continued to educate herself outside the classroom.

She developed the mindset that she didn’t want to be uneducated for the rest of her life, especially being a mother who wanted to set a good example for her kids.

When she gave birth to her first child, life was very hard.  They were living in a tiny nipa house. Her husband was a fisherman.  Since he was the only one working, that was the only source of income available to raise a family.

For her husband, he just wanted a simple life of having kids, being able to feed them three times a day. He was never ambitious enough to provide well for the family and for the kids; however, her mindset was totally opposite of him.

She wanted the best for her kids and for the family. She didn’t want her kids to be in the same cycle as most of the people and families living in that village.  They married young, had no education, and no ambitions at all.

With a strong drive to succeed and the ambitious woman that she is, she started a small business without any experience.

She trusted her instincts and just went for it even she was uneducated and knew nothing. And, she educated herself in various areas of finance.  She began saving money and lived more of a frugal life.  As the years went by, she had more children. She gave birth almost every year at the same time became more and more stronger in her life as she continued to motivate herself to give a better life for her kids.

Her business started growing in the 1980s.  She became the most powerful and successful woman in that village due to her popularity in running a business.  She was able to generate a lot of business from the fishing company, bake shops, grocery stores, trading company, bought properties, sold pebbles from her island, and traded various other goods and services.

She became very popular and had a lot of connections.  She became a woman of charm and character when it came to business.  Despite all her success and hard work to, her husband didn’t like it much, and most of the relatives in the town were so jealous of her achievements, but she didn’t give up.

She continued to pursue her goals and became more successful in business mainly to provide a better education and better standard of living for her kids.

She knew nothing, but she was able to learn it all, due to her confidence, ambition, motivation, drive, and discipline to stay out of the rat race and avoid the vicious cycle that so many other villagers let themselves get trapped in over there.

Then one day she decided to move her kids to the city. She wanted her kids to receive their education in the city since the only education available during that time in the village was grade school.

However, the husband didn’t like it.  It’s was always the root cause of their arguments and fights.  He didn’t want the kids to leave the village and get a better education and life.  All he wanted was a simple life for the kids and have the family remain in the village.

She did her best to move her kids to the city.  She would travel back and forth from the island and the city in order to look after the kids and her businesses in the province. It was very tiring, and stressful for her during this time.

While the kids were going to school in the city, she started up a bakery in the city for an additional source of income to help raise her family.  This is how she always thinks.

She’s always thinking about business and ways to make more money to provide for the growing family.

It wasn’t until she gave birth to her ninth child in 1991, that her busy life of operating several businesses and raising, what was now nine kids, began to wear on her.

Having no one she can trust to operate her other businesses, she began to close many of them.  Her husband, who lacked ambition, only wanted a simple life.  He didn’t want the responsibility and challenges that come with operating a business.  He provided little support and wasn’t really helpful in lifting her spirits during these difficult times.

The more her business was growing, the more her husband’s alcoholism and infidelity grew.  Sometimes, when she returned home from work, she was welcomed by a physically abusive and drunk husband.

Even though she was tired of operating her businesses and had to come home to a lazy and abusive husband, she but remained stay strong for her kids.

I think everyone has a breaking point…

No matter how mentally and physically strong you are, eventually when a person is under too much stress for a certain length of time they began to break.

After 20 years of marriage, having nine kids, and operating several businesses with practically no support, she slowly begins to collapse under the pressure. It was at the point in her life she felt so stressed, tired, and, depressed and really didn’t know what to do anymore.

Yes, she was once strong and powerful, but after all those years without having a supportive and helpful husband and partner in life, she slowly began to fade away, and eventually lost herself and the desire to continue her successful businesses.

She has no one to depend on or a shoulder to cry on during her most difficult times in life.  Eventually, this all led to a nervous breakdown.

All of a sudden this strong and powerful woman left everything and hide from the world.

After she left, her husband drank, smoked, and womanized even more.  He didn’t care much about what was going to happen with the kids now that their mother left all of them.

Luckily, the eldest son became very responsible and looked after the youngest siblings, especially the four youngest of nine.  While working several jobs to feed his youngest sisters, he was also looking for other ways to find their mother.

Then one day they found her hiding in a faraway province living a new life. All the pain and stress she had endured throughout those 20 years, had a damaging effect on her psyche.

Her family wanted her to come back, but she refused.  She didn’t want to live with her husband anymore and take his constant abuse.  So the kids let her be and live the new life she created.

Living alone without her nine kids proved to be more difficult than she anticipated, but she needed the time, space, peace of mind, and healing.

However, being away from her family didn’t stop her from being productive.  She found ways to support herself.  She didn’t start a new business again; however, she continued to learn new skills.

She took sewing classes so she could learn to make dresses.  Also, she started working in factories where she could gain more skills.  This is how she has always been.

She has always had the ambition, persistence, fire, and burning desire to learn.

Before she decided to leave the country and work abroad as a Dressmaker, she started keeping in touch with her kids again. She began to feel whole again.

Although she felt so bad for leaving her kids, she knew it was in the best interest of the family. She thought she needed to regain her strength again for her kids. She felt like she wouldn’t be able to do it if she was not herself anymore.

It took time and a lot of emotional healing before she was ready to face her kids again.

Since she’s been working abroad, she is still doing her best to support her kids with their dreams, goals, and education.  Today, all her kids have been successful in life, and that’s her greatest achievement.

Ever since she became a mother, that was her vision and mission in life.  All she wanted to see was all of them become a decent hard working people and achieve success in life.

Even though not all of them were able to finish their college degrees, they turned out to be responsible, kind, and respectful people, and that is something that she can be proud of as a mother.

Today, she is growing older graciously and happier as a mother.

All her life struggles made her the most beautiful and strongest woman I have ever known.

I am most grateful for having a role model like her to look up to in life, and I am honored to call that woman my mother.

She taught me so many lessons in life and shaped me into the successful woman I am today.  I would not be where I am today if it wasn’t for my mother.  She taught important lessons in life that cannot be learned in the classroom, and I will be forever grateful for having such a strong and intelligent woman like her in my life, and so this concludes my story of the strongest woman I have ever known in my life.

To my Mom, thank you and I love you so much!

I hope my moms story will inspire many women and moms out there. 🙂

I would love to hear from you and what you think about my moms story.